How to overcome disease
by Koichi Tohei

A human being is a segment of the Ki of the universe surrounded by a body. So you can remain vigorous and healthy by extending Ki. When you are sick, your extension of Ki becomes weak. The life force becomes enervated and the disease worsens and lingers. “If you have an ailment of the body,” a Japanese saying goes, “do not let it affect your mind.” When you keep a strong mind which extends Ki, your life power cures disease quickly. If, on the other hand, you worry over a slight headache and an odd feeling in the stomach, you are inviting trouble. When you think you are catching cold, you develop a fever and have to stay in bed for three or four days. How to overcome disease? Think to yourself: “I don’t like catching cold. I’m just not going to do it.” Then you will be all right, even if you come close to being sick.

I take about 300 students to the Kinu River north of Tokyo to do Misogi, a purification rite, every January Third. Wearing swimming suits, we give a big “Kiai,” a shout from the martial arts tradition. We dip our bodies up to the neck in the cold water and stay there four or five minutes. If you lay a wet towel down on the riverbank, pebbles will freeze to it. But no one catches cold. The students range from nine to seventy years old. Having entered river, they never catch cold during the year. How to overcome disease? It is because they think, “I didn’t catch cold swimming in the river in the middle of winter. Why should I catch one sitting with all my clothes on in a warm room?” If you adopt this thought pattern, you won’t have to wade in a river in winter time to remain immune to colds.

Suppose you experience pain in the chest. For instance you go to a doctor and he says there is no problem; you become anxious and doubt his skill. You see another doctor and feel relieved when he tells you that you have pleurisy. lt is a wish fulfilled. A friend comes to the hospital to see you. “It must be rough, having pleurisy,” he says. “Another friend of mine had it once. He developed peritonitis and died. Take care of yourself.” Such “encouragement” only makes the patient’s outlook more negative.
How to overcome disease? Once you fall ill and have to stay in bed, do not weaken your Ki. Practice extending Ki even then. A man has a great curative power at his disposal when the life power is fully activated.

Once I went to have my body X-rayed. A videotape recorder was prepared. I stood in front of the X-ray machine and swallowed a dose of barium. Dr. Ariizumi told me to quicken, then lower my pulse. I did as I was told and I heard people in the next room watching the tape expressing amazement. I was surprised myself, when I saw the tape later. 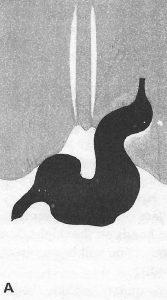 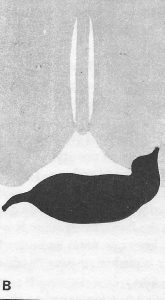 When you are angry, worried, afraid, or depressed, the stomach takes on the shape of Figure B. These emotional states have a similar effect on the intestines. Each of the doctors was surprised and said he would have to be careful not to get angry. The pulse is controlled by the autonomic nervous system, so people ordinarily cannot change it at will. But I can vary mine by 20 or 30 beats a minute whenever I like.

Change his pulse simply with his own will

I was invited to give a lecture and demonstration at an annual worldwide medical convention held in Honolulu in 1955. When I had finished, a doctor from Waipahu asked the audience of doctors if they thought it was possible for a person to change his pulse simply with his own will. All the doctors said No. “Then check Mr. Tohei’s pulse,” said the first doctor. Several came up on stage to test me. I changed my pulse immediately, as the doctors requested. They had to believe it because they were checking it themselves. All of them were surprised. The doctor from Waipahu asked if they could understand why. They said no and asked me to explain. “Everyone’s pulse quickens when he is angry, afraid, or worried,” I said, “If you think you are angry, your pulse rate increases. On the other hand, if you think you are as calm as if you just awakened in the morning, the pulse rate slows. You can control your pulse by the way you think.”

They understood this but none of them could change his pulse. I explained further. “Though you think you are angry, you are not truly angry. Though you think you are calm, you are not really calm. That is why you can’t change your pulse. You have to learn how to control your mind.” The practice of quickening the pulse is bad for the health and unnecessary. But slowing the pulse is of great importance.

How to overcome disease? When you control your mind and stay calm all the time, all of the organs function at their best. The ailments of the liver, kidney, heart, high blood pressure and glycosuria are all difficult to cure. Some people take five or six kinds of medicines to cure these diseases. But each drug creates an undesirable side effect. Taking them habitually will eventually cause problems. If you have to take medicine, take as little as possible. This is a good time to introduce Ki Breathing, which will enable you to live long. This breathing method originated in the traditional Japanese misogi breathing called “Nagayo No Den.” 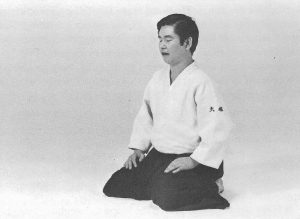 When you have done this

Repeat this procedure. In the beginning you will be able to extend the inhalation/exhalation cycle only to about 20 or 30 seconds. You can do it for one minute only when you keep one point and relax. You can achieve everything through practice. A human being takes food and, burning it to produce energy, maintains life. Oxygen is needed for the combustion, so air is taken. After burning the food, it is necessary to expel waste products like carbon dioxide. This is what breathing is all about. People living in the convoluted modern world, however, become angry and depressed and keep their arteries contracted.

Oxygen extracted from the air by the lungs is distributed to the body through the arteries. But if they are contracted, the passage of oxygen is impeded. The return of carbon dioxide to the lungs is restricted also. Large concentrations remain in the body which, because of waste products, burns incompletely. This incomplete burning produces disease. Young people’s life power usually remains relatively vigorous. But during middle age, liver, kidney, and blood pressure ailments set in.

How to overcome disease? The first thing to do is to make the burning process complete through Ki Breathing. There are many breathing methods taught throughout the world but they deal only in what I call “outside breathing.” Outside breathing means inhaling to the lungs and exhaling from the lungs to the atmosphere. Inside breathing means sending oxygen to every part of the body through the blood stream and bringing carbon dioxide and waste products back to the lungs. The capacity of the lungs is 3,000 to 4,000 cc. The volume of the breath is 700 to 800 cc. Deep breathing is necessary because old air always remains in the lungs.

If you are concerned only with changing the air in the lungs, four or five deep breaths are enough.

lt takes about 20 seconds for the blood to circulate throughout the body. During one minute, the blood passes through the body three times. Our body is filled with fresh Ki, the skin, because of improved metabolism, wrinkles. You are able to stay young and fit. Ki Breathing Method is the best medicine to live long and with energy.

The liver is an assembly of veins. Increased oxygen supply improves their functioning. How to overcome disease? Most liver problems can be solved by three or four weeks of earnest breathing exercise. When the liver functions well, more impurities are removed from the blood and the kidneys are less sorely taxed. Problems with the kidneys are thus also improved. With both liver and kidneys functioning well, the entire body benefits. This is the origin of the Japanese saying, “The liver and kidneys are most important.”

Improved circulation of blood will naturally eliminate high or low blood pressure troubles. People with heart problems should not breathe too long. Keep one point, relax completely, and breathe in and out as quietly as possible. All sick persons breathe roughly in short cycles. Breathing quietly, you will be able to extend the cycle. When you are able to breathe normally—and at long intervals—- you will have recovered. If you have difficulties with sitting seiza, you can sit in a chair. But if you sit too far back in the chair, your torso will tend to bend and it becomes difficult to keep one point. So sit on the edge with your back erect.

How to exercise while bedridden?

A sick person who has to stay in bed can do breathing exercise lying on his back. How to overcome disease? Breathe out as much as possible, wait a few seconds, and breathe in as much as possible through the nose. Wait again for a few seconds and breathe out. While breathing, think of nothing else. Send your Ki to every part of the body with your breath, and imagine that you are breathing out all the evil things from the body.
Your life force will revitalize and you will surprise the doctors with your quick recovery. When you are sick, you have little to do. You might as well practice Ki Breathing and Unification of Mind and Body. After you have recovered and returned to normal life, you have gotten a great deal of benefit. This breathing method keeps blood from accumulating in the brain and allows sound sleep.

Try to get rid of the minus attitude that ordinarily accompanies illness. Maintain the attitude that you will never fall ill as long as you practice this breathing method and have a continuous interchange with the Ki of the universe.

A good breathing meditation is the Quantum Light Breath Meditation

912 thoughts on “How to overcome disease”